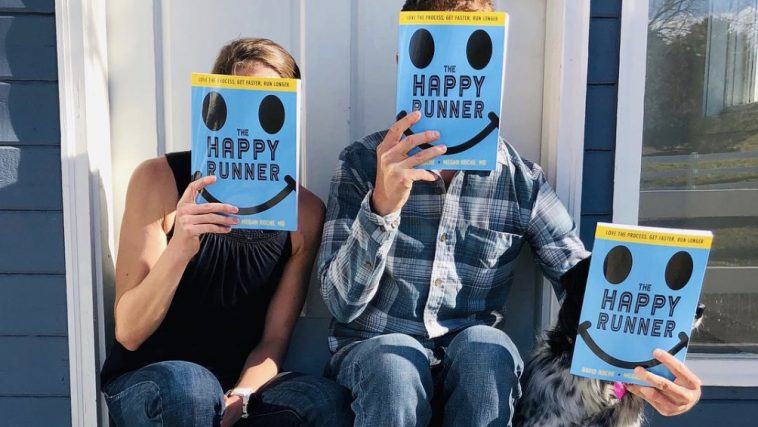 The Happy Runner is an upbeat book about a training philosophy to run fast and for a long time with joy and good sense of humour. A method to which many top ultra-trailers subscribe. The book is aimed in particular at runners who are a little tired of training, to the point of having lost the enjoyment of the effort. It is currently only published in English. Distances+ has read it for you.

When you hold The Happy Runner in your hands, the first thing that strikes you is the cover: two big eyes and a broad smile that reminds you of Roger Hargreaves collection of children’s books, the Mr.Men and Little Miss (Mr. Fast, Little Miss Fabulous…).

If you read our peers from Trail Runner Magazine, you’ve probably already heard about the authors, runners and coaches Megan and David Roche. The latter is a regular columnist. Both are references in the world of running in the United States.

Working Hard, Playing All the Time

The Happy Runner is largely inspired by the coaching experience that David and Megan developed as part of the SWAP team, which sums up the couple’s philosophy: if work is the means, fun is the end.

The structure of the book reflects the importance David and Megan place on the psychological dimension of racing. The first part is entirely devoted to what they call the rules of the happy racer.

The first rule, “Embrace the process,” invites readers to put races and competitions into perspective, to place them in a broader framework that includes training and even everyday life. Contrary to what titles such as “Power yourself with Kindness” or “Know your “why?”” might suggest, the two authors do not get lost in long philosophical considerations, disconnected from the reality of athletes. On the contrary, they draw on their respective experiences, using anecdotes from their teams and proposing reflections that sometimes seem to be “common sense,” but that it is always useful to keep in mind.

The second part develops the main principles of what should be the training of the “happy runner.” Megan and David point out, among other things, that just because it’s easy doesn’t mean you shouldn’t make an effort (first principle: “Easy means easy, not the absence of pain”) and that you become strong by working on your speed (third principle: “Build strenght from speed”).

While they do not neglect the technical aspects and offer small, very practical training plans, they favour anecdotes from the daily life of the SWAP team. So if you like a Cartesian approach to training (with a nice chart and statistics that only you understand), this part will probably leave you wanting more. Indeed, the Roche couple insists on the need to leave room for intuition, sensations and listening to the body.

The main interest of the book is that it can be read in many different ways. You can easily move from the first to the second part, which are all interrelated, or you can read only the sidebars, which are small stories from the experiences of the athletes on the SWAP team. This adventurous reading is facilitated by an engaging and direct style, punctuated with references to popular American culture, which are sometimes obscure, but which make you really feel like you’re talking to two friends who want to make you not just a happy runner, but more broadly a happy person.