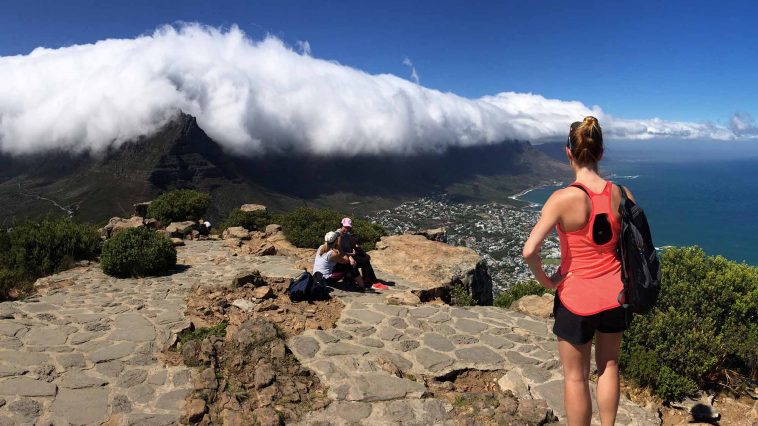 Before setting foot in the province of Western Cape, South Africa, little did I know that I was about to explore the ultimate playground for outdoor enthusiasts. Dominated by grey, jagged peaks, and with the ocean nearby, this surreal landscape is perfect for running, hiking, cycling, paragliding, hand gliding, and surfing. If you can muster the courage to fly all the way to Cape Town, you will not be disappointed.

Table Mountain dominates the landscape. Whether you wander downtown, through the harbour or in the Gardens (the hip neighborhood), it comes into view when you least expect it. Located right in the heart of the city, it is 1085 meters tall and 260 million years old – older than the Alps, the Andes, and the Himalayas.

My friends and I quickly decided to reach the top of this amazing feature. We chose to hike a less touristy path called Kaastel Poort Hike.

Since we were not familiar with the potential challenges of this trail, we hired a guide. Lisel, an Afrikaner from the area, met us at 6 o’clock in the morning near Table Mountain Pipe Trail, with a group of like-minded hikers with whom we socialized during our ascent.

The first hour and a half is a steep climb in switchbacks. Fortunately, our effort was rewarded with exceptional viewpoints that made up for the early morning start. Later we strode on the relatively flat plateau that forms the summit of Table Mountain, where one can admire the scenery as far as the eye can see.

During our hike, Lisel showed us the local flora: South-African plants like fynbos and proteas are plenty along the trail. As we progressed upwards, the terrain morphed into a nice rolling trail, perfect for trail running. Lisel told us about Ultra-trail Cape Town (UTCT), where participants climb Table Mountain and run around its plateau before going back down to tackle the summits of Lion’s Head and Signal Hill, as well as many other points of interest. I was hooked, and I quickly added UTCT to my bucket list of races.

After four hours of almost complete solitude on Table Mountain, we climbed the final ladder, which leads to the main lookout that overlooks Cape Town. It is also where a cable car deposits sightseers. It felt strange to see so many people all of the sudden, whereas the mountain was empty behind us! We hopped in the cable car to descend, happy to head to the beach to relax.

Lion’s Head, the queen of panoramas

The morning of our last day in Cape Town, I woke up with only one goal: climbing Lion’s Head, the circumference of which we had been circling for the last two weeks. A taxi dropped us off at the foot of the mountain and we reached the 669-meter high summit in less than 45 minutes.

Our hike started on a wide, dusty track that became a narrow path overlooking an impressive slope. It ended in what one might refer to as a rock climbing adventure for the last 50 meters.

The summit is a very popular destination and offers a 360-degree view on the surroundings. One can see Cape Town and Camps Bay, but the most impressive is the aforementioned Table Mountain, with the clouds that dance all around it. If I lived in Cape Town, I would run on these trails every single morning before breakfast, just to enjoy some alone time with a view on the Table!

We ran back down to treat ourselves after the upwards effort. Once at the base, we couldn’t find a taxi ride, so we ran the five kilometers back to our hotel. Breezing through these streets that we were now familiar with, we felt like we were locals. Somehow, running abroad gives you that feeling of coming home – to a new home.