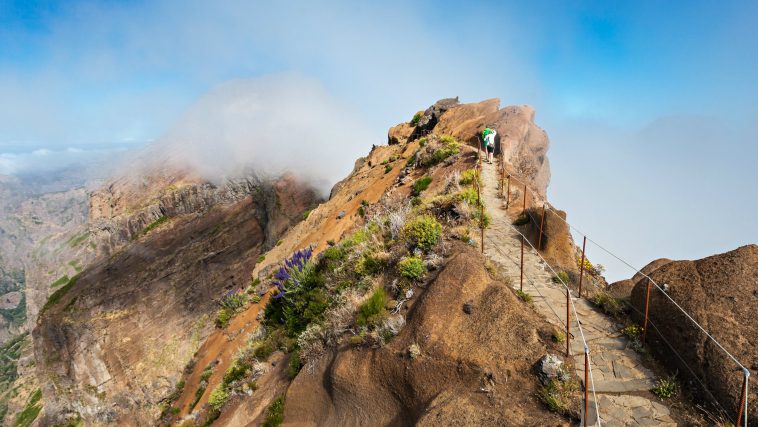 With serrated peaks, green canyons, and cliffs that dive straight into the ocean, Madeira has it all. Located 700 km off the coast of Morocco, this 727 square kilometer island is a discrete, well-hidden gem that ranks high among the best places in the world for trail running. And for good reason! With countless itineraries to choose, you are always less than a 30 km to run from any one of the many breathlessly high peaks to the ocean.

A unique heritage to explore

You may want to visit Madeira for the incredible scenery, the single track trails that go on and on, and the balmy temperatures. However, there is much more that makes it stand out among coveted trail running destinations.

Madeira is known for its 1,450 km network of levadas, irrigation canals that were used in the 16th century to redirect water from the rainy, northern part of the island to crops in the south. Nowadays, a large number of these canals provide runners and hikers with exciting options to explore the island.

According to Ferreira, the island is more or less divided in two zones: the central mountain range and the laurel forest (Laurisilva of Madeira, a type of subtropical forest in geography of high humidity and mild temperatures). The former includes the island’s highest peaks and is ideal for demanding workouts. Pico Ruivo (1,862 m) is the highest summit of Madeira and the third highest summit in Portugal and its offshore islands.

Ferreira says half-jokingly that climbing Pico Ruivo requires “a love for stairs”…Indeed, the last meters must be climbed one step at a time, which is the case on many of the island’s peaks.

Runners will find less strenuous terrain in the laurel forest, located in the northern part of the island. Thanks to many levadas, it is possible to explore the dense and humid subtropical vegetation for which the island is famous. Jesus explains with pride that the laurel forest is 4 million years old and is a UNESCO World Heritage Site.

If you want to feel like you’re the star of a scenic movie, run from town to town, following cliffs along the ocean. Ferreira’s favorite trail is Larano – The lost world experience, an out-and-back route of 22 km and 700 meters of elevation gain between Levada de Machico and Vereda do Larano.

Temperature-wise, Madeira is comfortable year round and is the perfect host for trail running events. According to Jesus, there is at least one race per month on the island.

Some of them are major events, like the Madeira Island Ultra Trail, which is probably the most famous. With 11 editions completed (the 2020 edition was cancelled due to the COVID-19 pandemic), it is part of the Ultra-Trail® World Tour. During the main event, a 115 km course with 7,000 meters of elevation gain, runners cross the island from West to East.

The Ultra Skymarathon Madeira (also cancelled in 2020) is part of the Skyrunner World Series and is usually held in June, in Santana. It is a 55 km race with over 4,000 meters of elevation gain.

In October, the mountains that surround the capital are host to the Ecotrail Funchal, which is comprised of four races ranging from 15 km to 80 km.

A few adventure travel companies offer guided running day trips on the island for less than 100 euros, as well as complete vacation packages and training camps for trail runners, where running is combined with other acivities like surfing, stand-up paddle boarding, and canyoning.