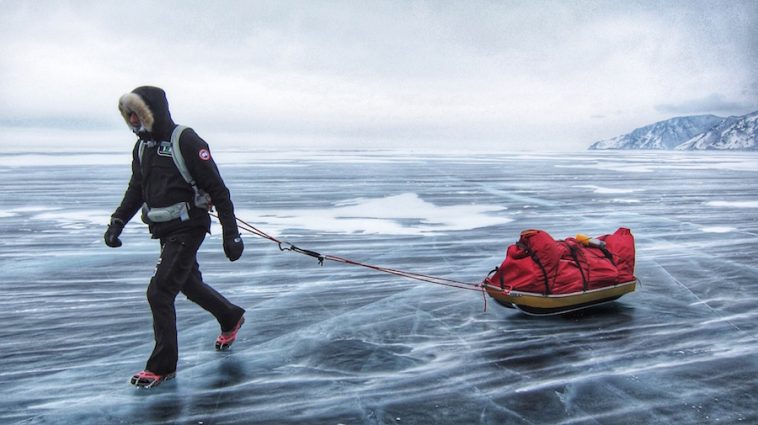 While most of us are cozying under heavy blankets through cold winter months, the Canadian adventurer and ultra-runner Ray Zahab is heading off today to a far different reality.​ Distances+ sat down with him to discuss his new expedition to the Arctic, and what drives him to continue his exploration of our planet.

Distances+ : Can you give us a brief overview of your expedition to the Arctic, that starts today, January 21st?​

Ray Zahab : I’ll be flying into Qikiqtarjuak, which is located on the island of the same name in the Qikiqtaaluk Region of Nunavut, Canada. It is situated off eastern Baffin Island. While I’m there, I’ll go to a local school, which I have been to a number of times, and meet with the students. We will do a live Facebook streaming, and students in classrooms across Canada and the world will be able to ask questions about the expedition.​ From there on, I will go from Qikiqtarjuak, across the sea ice cross Baffin Island and on to Pangnirtung. This would amount to approximately 300km of travel, on foot and skis. This expedition will be solo and self-contained.

How much equipment will you be taking with you on this expedition?

Roughly 40 pounds of gear. The plan is to travel fast and light. We’re planning for 15 to 20 days, but I’ll only be carrying one week’s worth of supplies. The goal is making it in one week or faster, but I obviously don’t want to jinx myself. Ultimately, it depends on a lot of factors!

What could be the most challenging factor preventing the completion of this expedition?​

The weather, by far. I’ve been on Baffin Island, where it’s been perfectly calm, at a balmy -30c in the winter and there’s a stillness, this weird stillness, and the sky in front of you is grey, and you know there is a massive storm coming, and within minutes, it descends on you with 100-150km winds, it becomes almost unsurvivable. Wind chill can be -60c. I’ve had all my Garmins freeze up, so you have to know how to use a compass, you have to know how to read a map.

Have you witnessed any climatological changes through the years, going back to your first time on Baffin Island in 2007 to your last visit in 2019?​

Oh absolutely. In 2017 on my Arctic Extreme Expedition, I remember looking for the Rundle Glacier that would have been to my left. In the past, I knew that when I would hit this certain braid of rivers because as I’m navigating the terrain, I constantly change directions as I’m crossing these rivers, I would look at the Rundle Glacier and I would know I was heading in the right direction. Now, it’s no longer there. When I’m at the moraine, I see the last remnants of the Rundle Glacier about a kilometre back.

This will be your eighth trip to Baffin Island. What keeps drawing you back?​

Everyone has got this one place when they see it, they cannot believe what they’re looking at. That’s Baffin Island for me, it’s absolutely incredible. Back in 2007, I set out to run the 3 coastal trails in Canada. The first one was on Baffin Island, the 100km Akshayuk pass. After I had finished that trail, I knew then and there, even if my time on Baffin Island had been very brief, that I had to come back one day.​ Now, you have to understand, I don’t do well with cold weather, so heading to Baffin Island in the winter, when the temperatures can reach -50c with very little light, can be a little rough as well as very challenging. But I love this place so much, and there’s something about certain places that draw us to keep coming back.​ This will be my 4th winter traverse on Baffin Island.

Is this the only project in the books for 2020?

This year is about passion projects. I’ve always said that the greatest adventures we go on, are the ones that mean the most to us. Doing something that you’re truly passionate about is why we all do adventures. So the two projects that I’m planning this year, will bookend all these other projects I have done over the years. This upcoming expedition to the Arctic on Baffin Island, and later on this year I will be looking to cross the entire northern periphery of the Amazon, roughly 5000 kilometers with my good friend Stefano Gregoretti.​

How long in advance do you start planning for such an expedition?​

Years. Take into account that I have travelled over 14 000 kilometers in deserts the Arctic and many other places now over the last 15 years, unsupported or with very limited support with the exception of the Sahara in 2006. So although I’m becoming used to doing expeditions, it takes me longer every time to plan them. I try to do these projects, and I always say, you want to be as authentic as you can. So for my Arctic expeditions, I choose to do them self contained and in the winter, and for my desert crossings, in the middle of summer, when the desert is at its most extreme. So logistically, it takes longer to plan when I’m going into environments in the more difficult times of the year.

Through all these expeditions, how do you maintain a healthy balance in life?

Well, for starters, this is my job, it’s what I do for a living. I have 2 amazing daughters, ages 8 and 11. My oldest is in Vancouver at the moment on a cross country exchange program. My youngest and I are out bombing around on the backcountry trails on skis. They’re both so incredible. My wife races and competes in ultra marathons. She raced the Moab 240 Ultra this year, finishing second which was amazing. Adventure is part of our family. In our house, we have a filing cabinet, not on any of our walls, are the awards the magazines the Meritorious Cross and I don’t want them to define me. What I want to define me, is my daughters thinking that what the old man does is actually normal and that we can go out there and do these things. We find balance in our life by normalizing what it is I do, but also by enabling my daughters to know that they can do anything they put their minds to.​ I spent 30 years of my life talking myself outta doing the hard stuff and being afraid of failure. When I got into running, it taught me to never doubt, to take chances and to try things out, because ultimately, you have one life to live. The greatest achievement for me has not been any of the expeditions, it’s been having my daughters and being on an adventure with them. That’s been my greatest achievement and motivation.​

For those unfamiliar with the name Ray Zahab, here is a brief overview of his 20-year career as an ultra runner and explorer.

In February 2004 was Ray’s first ultra-marathon, the Yukon Arctic Ultra. It was a brutal 160 kilometer competition in frigid weather, which he won. This led to participation in numerous ultra-endurance races, most notably the ”Marathon des Sables” in 2004 and 2005.​

His first true expedition would come a few years later. On November 1st, 2006, Ray, Charlie Engle and Kevin Lin embarked on a gruelling 7500 kilometer crossing on foot through extreme conditions of the Sahara Desert, from the coast of Senegal Africa to the Red Sea, which they completed in 111 days. This expedition would forever change Ray’s outlook on life.

In 2008 came a different type of achievement, the founding of impossible2Possible (I2P), an organization aiming to inspire and educate youth through adventure learning and participation in expeditions.

Since that first expedition in 2006, Ray has continued on this path of exploration. His travels have taken him to every corner of our planet, on foot, skis and by bicycle.

It will come as no surprise that Ray is also a very sought after public speaker, having spoken at numerous events around the world and for a number of reputable corporations on his passion for inspiration and adventure racing.