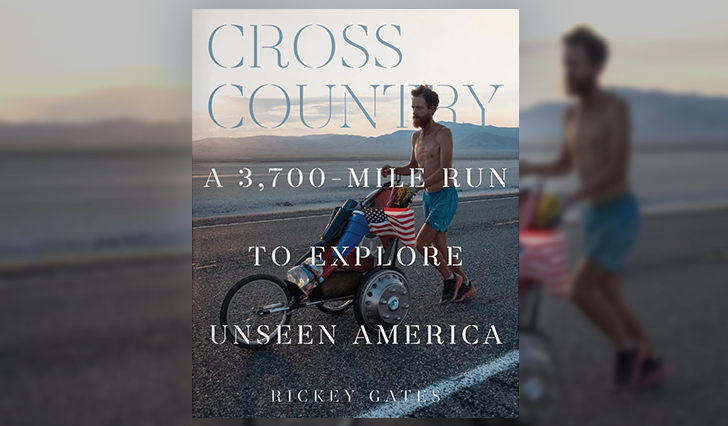 Gates’ book  “Cross Country – A 3700-Mile Run to Explore America” begins with a double hangover: the first due to alcohol and the second due to the election of Donald Trump. Surprised by Trump’s victory, he realizes that he ultimately knows very little about his own country. He then decides to cross the nation from coast to coast, in order to witness a direct and personal account of it.

As he himself explains it in the first chapter: “to cross a place on foot is to observe and participate in a vast and complex web of infrastructure. It is to experience the history of that place in a very real and personal way. It is to have a better understanding of what that place is…”

In the immense community of trail running, Rickey Gates belongs to the category of runner-travelers, those for whom running is not so much a sport rather than it is a way of inhabiting the world and discovering oneself.

There is something in Gates’ approach of the author Edward Abbey (whom Gates knows and quotes), who penned the sublime Lonely Desert, and from Jack Kerouac, that of The Dharma Bums. This experience of traversing space and inhabiting it, is an incomparable learning experience, in comparison with the normalcy of a point to point airplane flight that simply cancels the space crossed.

An incredible journey from the East to the West

This book describes a cross-contentinal run across the United States. Rickey Gates is neither the first nor the last to embark on such an adventure, as evidenced, for example, by the novel – based on a true story – The Great Flanagan Race by Tom McNab.

This crossing of the continent, which he chose to make from the Atlantic coast to the Pacific coast thus following the journey of the discovery of the West. Gates left Folly Beach in South Carolina on March 1, 2017 and linked his successful attempt to the port of San Francisco in California on August 1 of the same year.

Logically, the book follows the chronology of this crossing: each chapter corresponds to a particular geographic region of the United States.

The organization of the book is systematic: a few pages that summarize the portion of the crossing covered by the chapter and a series of photographs of people he encounters briefly commented on.

These photographs, occasionally portraits, but more often scenes from everyday life where the subjects are captured in their environment, testify well to the ambition of the book: Gates is above all interested in the men and women he meets on his path.

He also places great emphasis on the lunch places, where “the community comes together, where a stranger like me walks in and becomes the topic of conversation, where coffee is bottomless, where you can better understand a town, a state, a country.”

On August 1, 2017, having arrived in San Francisco, Ricky Gates’ first impulse is to immerse himself entirely in the Pacific Ocean, a gesture which is a “baptism of sorts, to mark an abrupt transition of movement, function, and meaning.”

When trail runners start writing, they easily suffer from two flaws: pretending to be poets or philosophers. Good will and enthusiasm are not enough to make a good book.

In this book, Rickey Gates does not suffer from any of these faults for the simple reason that he does not pretend to be anything other than what he is: a guy who likes to run, draw, and take pictures of the people he had crossed in his path across the continent. There is no weighty message to deliver, and no encumbering life lesson to teach: there is only the pleasure of sharing an authentic and sincere experience.