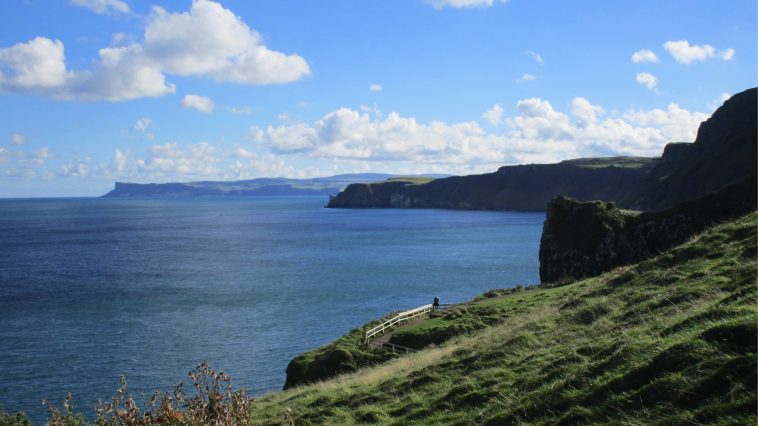 Mountains, flat rolling lands, lakes, woodlands… Ireland is not big, but it is grand. The country is also dotted with trails that make you want to explore it on foot. I suggest some memorable trail sites that I had the chance to visit during my stay in the land of my ancestors, as well as some races held in these enchanting places.

First of all, I was fascinated by the short distances to travel to get from one extraordinary place to another. Based in Dublin for most of my stay, I realized that in ten days I could explore many parts of the country.

To the north: the Giant’s Causeway

I started in Northern Ireland, specifically in County Antrim, less than an hour and a half from Belfast. My goal was to visit the famous Giant’s Causeway. I expected the view to be sublime; I wasn’t disappointed. Imagine a path that runs along the cliffs overlooking the sea and allows you to see Scotland in the distance.

The terrain is very varied: clear paths, peat bogs, brambles, cliffs and beaches. One of the events held there is the Causeway Coast Marathon, which has an ultra component. It is a race of about 65 km (40 mi) combining several surfaces and views, each more breathtaking than the last.

I continued my trek to the east coast of Green Island, home to Wicklow Mountains National Park. It is the largest expanse of mountains in all of Ireland. The trail that crosses this territory, the Wicklow Way, is the longest in the country and totals 127 km.

The Wicklow Way race, from the RAW series, is organized there. 80km and 160km routes (the 80 km being out and back) are offered. The trails are very technical and the route is difficult. It includes flats, steep descents and climbs and, finally, a descent with a view of the city of Dublin. All in all, the game seems to be worth the candle.

Also in County Wicklow, but this time in the village of Glendalough, less experienced trail runners may prefer the Glendalough Trail. The 8.6 km and 15.5 km routes are well groomed and therefore relatively easy, while offering a breathtaking panorama where woodlands, lakes and mountains intermingle in an enchanting setting worthy of the best movies. Several feature movies have also been shot in this region, including Lassie, Reign of Fire, King Arthur, Braveheart and P.S. I Love You, as well as several episodes of various series such as Vikings and The Tudors.

You can’t visit Eire (the Gaelic name for Ireland) without taking a tour of the Atlantic side, about an hour and a half northwest of Galway, home to the Connemara Wilderness. Combining mountains, moors, lakes and bogs, the West of Ireland is a land that is not easily tamed. Of all the routes that can be taken there, some are suitable for everyone, while others are reserved for the elite trail.

The Gaelforce Mountain Run, a trail event organized in this authentic region, offers several races on sometimes open terrain, always wet, and largely fenced due to the proximity of the mountain ridge. The relatively short journeys are divided into three sections: 12 km for beginners, 12 km for intermediates and 22 km for experts. The expert course combines steep climbs and descents, and a vertical drop totaling 1370 m.

The south: next time

The Irish are among the most welcoming people I have ever met. Unfortunately, in order to have time to discover the beautiful regions I described, I had to sacrifice my plans to explore the southern regions. In fact, it just gives me one more reason to come back to this island of tales and legends. There are so many great reasons to travel and race in Ireland.