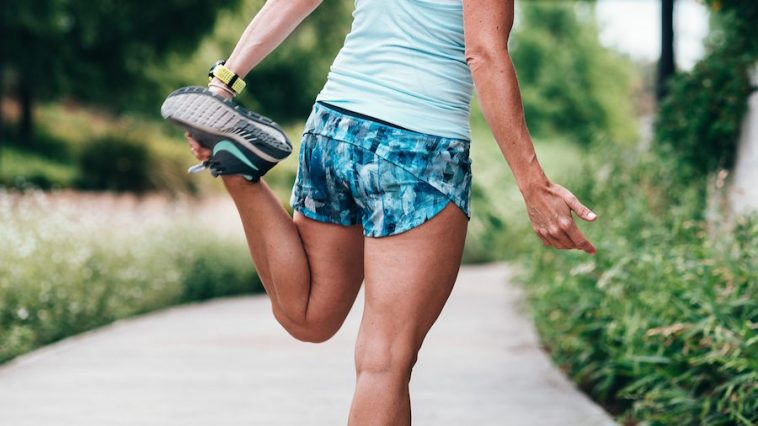 To stretch or not to stretch, that is the question. Stretch before, stretch after? Stretch for 10 seconds? Stretch for two minutes? What types of stretches to try? Should we stretch, warm up or both?

Does science have a clear answer to all of these questions? One thing is certain, popular opinion still seems clearly in favor of stretching : 95% of coaches believe they are highly beneficial. So let’s dig a little deeper to see what science has to say on the subject.

Advocates of flexibility argue that a more flexible musculature around a joint will require less effort to execute a movement within a certain range of motion, given the reduced level of resistance. Others claim that, on the contrary, a gain in flexibility risks losing the ability to store energy in muscle and tendon structures. This phenomenon, responsible for the “rebound” effect (i.e., stored energy released to propel the runner forward), would reduce the active effort required on the part of the runner and would therefore make their stride more efficient.

What do the studies say about the impact on performance?

A number of thorough and scientific studies allow us to conclude that muscle stretching before an event does not improve strength, power, speed or endurance. The effect may even be detrimental to performance.

Moreover, a systematic review from the British Journal of Sports Medicine in 2012 concluded that stretches of more than 60 seconds prior physical activity actually reduced muscle strength, while stretches held for less than 60 seconds had less of a negative impact.

An overview in the 2014 edition of the American College of Sports Medicine’s Current Sports Medicine Report clearly points to no benefit and reduced performance when static stretches are done just before exercise. Some studies have attempted to demonstrate that a warm-up period after stretching could reverse the unwanted performance effects of pre-workout stretching, but the results are inconsistent and unconvincing.

Most studies on the impacts of muscle stretching before an activity relate to static stretching.

What about the impact of dynamic stretches and PNF-type stretches?

Few studies have looked at Proprioceptive Neuromuscular Facilitation or PNF stretching (alternating contraction and stretching of muscles), but the results so far seem neutral or negative. At the same time, studies appear to show that dynamic stretching has a beneficial effect on performance, especially when it precedes events requiring power and strength, according to a 2014 overview in the Current Sports Medicine Report.

What do studies say about the impact on injury prevention?

Two meta-analyses (studies with the highest level of evidence), including a 2011 Cochrane review which combined an aggregate of 12 studies involving 8,806 runners, could not highlight any positive impact of stretching before exercise on prevention injuries.

Otherwise the literature is not abundant and offers little information allowing precise recommendations regarding stretching to be made immediately after exercise. Another Cochrane review from 2011 found that stretching after or before exercise has no significant effect in reducing muscle soreness following an activity (i.e. delayed onset soreness).

What about warming up?

A systematic analysis published in 2010 in the journal Strength & Conditioning Research combined 32 studies and demonstrated an improvement in performance in 79% of the criteria examined in runners after a period of warm-up. A systematic review from 2006 also appears to point to a benefit in terms of injury prevention. However, the literature supporting the addition of a cool down period is scarce and insufficient to make clear recommendations.

What about yoga, which is so popular with runners?

Unfortunately, few studies have focused on the subject. A 2006 study from the British Journal of Sports Medicine attempted to shed light on the potential benefits of either yoga or mental preparation. The results demonstrated a significant improvement in performance over the course of a mile in the mental preparation group, and a slight improvement in the yoga group. Anecdotally, runners report that the benefits of yoga are most felt when this activity is performed separate from running and racing, with the objectives being gains in proprioception, overall flexibility, mindfulness and coordination.

In conclusion, here are some recommendations: