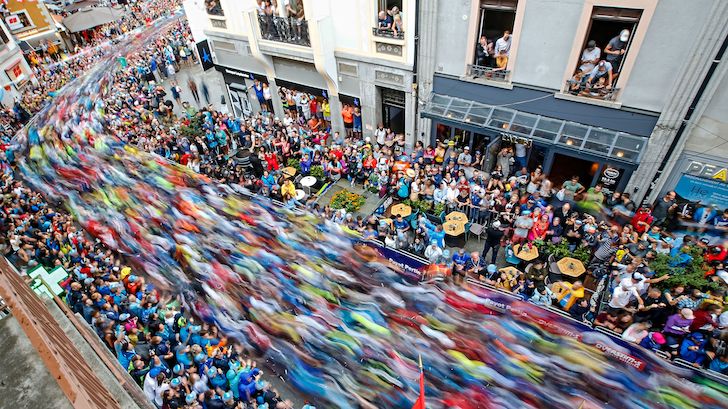 The news caused a stir in the trail industry last week: the “UTMB Group” and the American company “The Ironman Group” are joining forces to create a new world trail circuit, the “UTMB World Series” (UWS) the same time they are scuttling the Ultra-Trail World Tour. What was not announced and that Distances+ understood by asking many questions is that to be a part of it, trail running organizations must become the property of either one or the other of the two corporations. At least one major French trail running event, the Festival des Templiers, already said no.

The Ultra-Trail World Tour (UTWT), which has existed since 2014 and whose rights belong to the UTMB group, will disappear at the end of the 2021 season. The UTMB Group claims to have invited all scheduled races (25 in total if we exclude the CCC, the TDS and the UTMB) to integrate the UWS, which will begin in January of 2022.

“The races will need to be 100% UTMB affiliated,” says Hugo Joyeux of the UTMB communications team. “Yes, it’s an acquisition logic,” confirms Marie Sammons, director of the Ultra-Trail World Tour, who is working on the transition from the old to the new circuit.

“The planning of the race itself will not change,” says Marie Sammons. “The organizers will continue to manage it as they are used to, with their volunteers, and keeping local teams involved. We will provide guidelines that organizations must observe so that all races follow the same standards as those of the Ultra-Trail du Mont-Blanc, especially in terms of safety.”

Even if each race keeps its original name and visual identity,  the mention “by UTMB” will be added, like the four races which are already under the label: Val d’Aran by UTMB in Spain, Thailand by UTMB, Panda Trail by UTMB and Gaoligong by UTMB in China, which will automatically join the new UWS circuit.

Note that the Ushuaia by UTMB and Oman by UTMB races do not appear in the preliminary list of UWS races and no longer appear on the UTMB World website.

Which organization, Ironman or UTMB, will acquire which race? “Basically, with Ironman we split the world,” says Marie Sammons. “Ironman will approach races in the Americas, Asia (excluding China and Hong Kong) and Oceania. The UTMB will oversee everything else”.

In terms of communications, a single web platform will bring together affiliated races, with dedicated pages that they can manage directly, explains Marie Sammons. There is the idea of ​​pooling resources, knowing that not all races manage their digital communities homogeneously. Some are very dynamic and generate a lot of interaction, others less. Tracking races should be mandated by one standard application, LiveTrail.

“We have six months to build the circuit,” explains Hugo Joyeux. Even though the marketing aspect of the project is well worked out, it is still at its construction stage: all the races approached by the UTMB group have not yet confirmed their participation in the circuit. The full schedule will be announced in the fall. Only the races that are members of the circuit (the Events and Majors races) will give access to the Ultra-Trail du Mont-Blanc races, which will constitute the “final events”.

Among the races of the current Ultra-Trail World Tour, the organizers of the mozart 100, in Austria, already announced last fall the purchase of their event by Ironman. It will thus become part of the UWS.

“Thanks to the Ultra-Trail World Tour, the mozart 100 has become the biggest trail race in Austria with participants from more than 70 countries,” they say. “We are proud to shape the future of our wonderful ‘lifelong project’ with a strong, professional and global event”.

Two other UTWT races already bought by Ironman will also be part of the circuit. They are the Tarawera Ultramarathon by UTMB in New Zealand and Ultra-Trail Australia by UTMB.

Shortly after this article was published, South Africa’s Ultra-Trail Cape Town’s director Stuart McConnachie told Distances+ that UTCT, who according to him is ” a big race in the eyes of elites around the world,” might also join UWS in 2022. He believes this project can contribute to “the growth of trail running” and that “one should not be scared of change”. “Change is always a source of uncertainty, but it will be positive for everyone,” predicts Stuart McConnachie. However, McConnachie stresses that it is still a little early to make the presence of the UTCT official on the calendar of the future circuit.

The organizers of the Ultra-Trail Harricana of Canada, in the province of Quebec, publicly expressed doubts. They explained on their Facebook page that they “would look carefully at what the UTMB World Series wishes to offer, but at the moment its organizational values ​​are not in line to join a private tour of this kind”.

In Spain, the organizers of the Penyagolosa Trails told Distances+ that talks with the UTMB started very recently (only two weeks) and that they were not over. “We need to listen to them again to give ourselves a full opinion,” they say.

Several other UTWT races remain silent on their position. One cannot find any publication about the UTMB World Series on the Western States, Hong Kong 100, or Mt Fuji Ultra-Trail’s websites or social medias, for instance.

Even though Marie Sammons does not provide a specific answer, she is not hiding that several French races are also on the UTMB Group radar, so trail runners of the Hexagon benefit from a choice of races if their objective is to run the UTMB. The group hopes to convince them to embark on its project with, among other arguments, being one of the few races in France to offer access to the prestigious Chamonix races.

Several organizations contacted by Distances+ confirmed that they were contacted but did not want any mentions while negotiations are underway, even though they have already decided which way they want to go.

The famous Templiers Festival, which is not part of the Ultra-Trail World Tour or any other circuit, was approached by the UTMB Group. The event, which brings together more than 10,000 participants each year, prefers to remain independent.

“I am in a different thought process” comments calmly Gilles Bertrand, the founding president of the Festival des Templiers for over 25 years. He exclusively told Distances+ that he sent an official rejection letter to the UTMB earlier this week.

Gilles Bertrand likes the popular and “accessible to all” side of trail running and wants to “cultivate positive communication” with his community, by continuing to manage his races with Odile Baudrier, his wife. “The UTMB is playing the globalization and modelisation card,” he observes. I say this without animosity, we do not recognize ourselves in such a system, which is why we prefer keeping our independence and stop there.”

Putting an end to rumours, Maxi-Race race director Stéphane Agnoli replies to Distances+ that he was not approached by UTMB and the answer would be “no”, without denigrating the competitor. “The UTMB being the benchmark international event in the field of trail running, it seems logical that they increase their international development by creating their challenge with their qualification method. They are, in my opinion, pretty much the only ones who can do that on the trail planet “, analyzes Stéphane Agnoli.

“So far, I do not sense any rejection,” says Marie Sammons, who is confident that “99% of all deals will be closed on time to announce the schedule in September”. “There is a real desire not to miss the boat,” says Hugo Joyeux of the UTMB.

However, several organizers to whom Distances+ spoke feel uncomfortable with this new circuit. “We ask ourselves a lot of questions,” mentions one event director. “We don’t understand everything,” says another. “We do not want to lose our identity” is an answer commonly given. “Our DNA is unique and non-negotiable” hammers a popular organization. “The pressure is intense” sums up a race director who feels “stuck between a rock and a hard place”.

Concerning the acquisition by UTMB or Ironman, the terms are not clear to anyone Distances+ spoke to.

In recent years, the Ultra-Trail World Tour saw some setbacks, although it seemed to be in a dynamic of expansion and development. The Grand Raid de la Réunion left the circuit after a few editions, as did the Marathon des Sables. Recently, the Lavaredo Ultra Trail, the Transgrancanaria and the Patagonia Ultra Trail also left the ship to join another newborn in the world of private global trail circuits, the Spartan Trail World Championship.

Note that in the latter case, Spartan’s avowed intention is to become a shareholder (and not 100% owner) of the races that make up its circuit.

The Xterra races promoter also inaugurated this year its International Trail Running Championship with races in the marathon format (42 km): the Xterra Trail Marathon, made up of 10 stages around the world.

According to Marie Sammons, the weakness of the Ultra-Trail World Tour is that “it is a structure with independent events. So that limits us. We want to do something more ‘inclusive’, with a common marketing plan. We want global communication. That is what will make the circuit so powerful” she says. “Every race needs to feel like it’s part of a whole”.

“Even if it stops by the end of the year, we are going to get to the bottom of the story and end this season as it should be” promises Marie Sammons. “I want to stress that the UTWT is not a failure. I forged a strong bond with various organizers, and we succeeded in creating a racing community that enriched everyone”.

“We also helped events in their development and to get recognized on the international scene” assures the director of the Ultra-Trail World Tour. “The year 2020 was extremely complex [due to the pandemic]. I stayed in touch with disillusioned and disoriented organizers who wondered what would become of them. The pandemic, as well as the initiative of the Spartan organization to pick up UTWT races, fueled our brainstorming. It is frustrating on a personal level, of course, because I invested a lot into building a relationship of trust with all these races”.

Marie Sammons also recognizes that the goal of the UTMB World Series is to be a “more dominant circuit.” The alliance with Ironman will consolidate this desire since it presents itself as the “world leader in the endurance events and mass events organization, with teams established in 26 countries, on all continents”. The two partners make no secret of their intention to create “the world’s largest trail running circuit”.