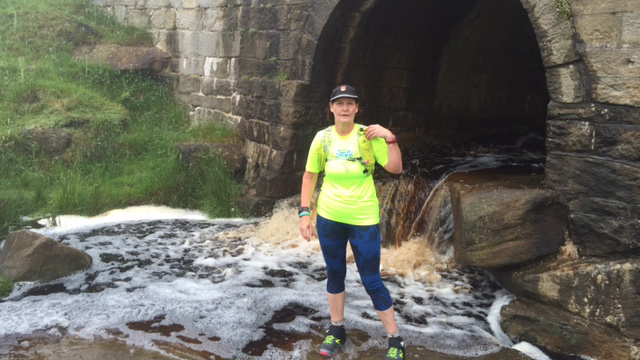 “Mentally, I am very strong.”

That’s all Grace Panoff says when I ask her how a 54-year-old goes from being a slightly full-figured woman to an ultrarunner.

With this mind of steel, which she brought with her as child from the UK, Grace has completed marathons, Ironmans and even a 100 miler, despite not being active before the age of 40.

“I was slightly overweight, maybe 35 pounds too much,” says Grace. “But that’s life – we have kids, we look after them more than ourselves.” She told her husband she’d get back in shape, but didn’t know how or even where to start.

It might have been running a commercial cleaning business on her own that gave Grace the spark that got her moving on two feet.

“I told myself, If I join a running club I could make friends!”

And it was getting older that gave her the motivation to get out of her comfort zone. “I was asking myself, What do I want to do with my life? Go to work, come home, watch TV? Is that really what my life is going to be?”

Grace joined a small club near her small town of Mount Hope, in southern Ontario. She went through all the training programs. First: the 5k. Then: the 10k. As she got stronger physically, she moved up to the half marathon, then the marathon (she now has four marathons under her belt!)

“I started getting bored of just running on the pavement,” Grace says. She needed more, so she tried a triathlon, then a demi-Ironman, then one full Ironman followed by another!

And then – you guessed it – Grace got bored again. So she turned to trail running, and within a year she finished her first 60k ultra.

Today, trail running gives her an incredible boost in life. Nothing stops her. Grace has several 25k and five 50k races to her name. In 2013, she ran her first 100 miler in Dundas, Ontario, a race she finished in a little more than 25 hours and without incident. “I like the long distances,” she says. “I’m better at the long distances than the short ones. I’m not sure why. I believe in myself.”

“I always get to the finish line – I’ve never DNF’d,” she adds. “I’m very competitive. In the last three years I’ve always finished second or third in my age group!”

“I’m just a middle-aged woman, about as normal as you get. There’s nothing unique about me,” says Grace, perhaps not fully aware of her inner strength.

But then her philosophical side speaks up. “On the other hand, I try to be someone special”. It’s this sense of grace that has marked her somewhere along the way. Her view on life is lucid: We have one life to live, and we never know when it’s going to end – maybe we’ll be gone tomorrow morning – so we have to embrace every moment.

I never get down, I’m always happy, believing in myself, helping others…
– Grace Panoff

A butterfly on social media

Grace likes Twitter. And Twitter likes her back. She gets in on running conversations, retweets posts and makes her own sporting news.

It’s how she discovered the Ultra-Trail Harricana race. Interested in the event, she started retweeting Harricana’s posts, which got the attention of race co-founder and president, Sébastien Côté.

“Sébastien wrote to me saying, You’re our number one fan, come run in Charlevoix!” And with nothing more than that, Grace was signed up for the 65k.

“I think it’s going to be my most difficult race because of the cut-off times,” she says. “It worries me a bit. Sébastien told me to train really hard.”

And so among those at the start will be Grace – with her smile, her good spirits and her mental toughness to get her through the Charlevoix wilderness (and along the way she’ll make some new friends from Quebec!)

Running changed Grace. Now it brings her to the other end of the world.