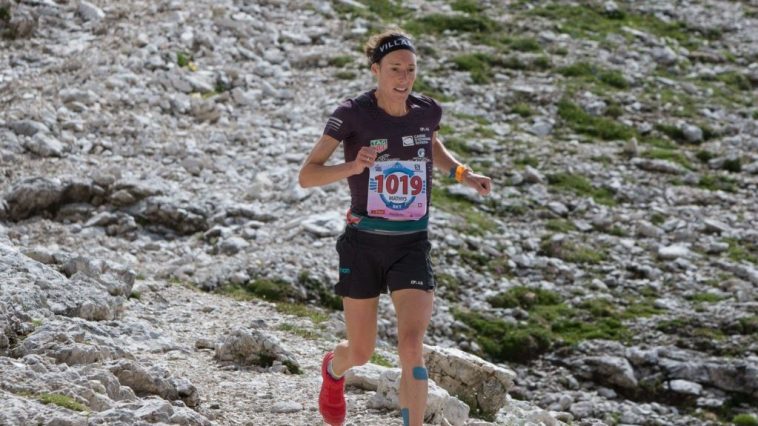 Swiss runner Maude Mathys sits at the top of the International Trail Running Association (ITRA) women’s list, just two points in front of the famous Courtney Dauwalter. While continuing to focus on racing local races, she accomplished major victories in 2019, such as Pikes Peak and Sierre-Zinal. Distances+ spoke with her about her new goal: the Olympics … competing in the marathon.

Having added a respectable third place at the Dolomyths Run that same summer, it was certainly a lot of racing in a short time, and a lot of accumulated points in the ITRA world ranking.

How did the 32-year-old nurse get here? Let’s go back. For a while, Maude evolved as a ski mountaineering athlete while competing in running. ˝I felt it was too much. I had to be ready all the time,˝ she said.

After welcoming her second child in 2016, she gave up competition in ski mountaineering and made the choice to devote herself to full time to skyracing, a discipline in which she is now a three-time European champion and five-time Swiss champion.

˝Running was the first sport in which I started to train seriously. And then I found it was easier; my training sessions lasted an hour. I could train from my home. I could run with the stroller. It’s a lot easier when it comes to material constraints, in terms of equipment, compared to ski mountaineering.˝

Maude, who now trains full time, is supported by a team as well as her husband and children. She thinks she has found the right balance. ˝I can train almost as much as I want, and I can be there for my family,˝ she said.

While her eldest daughter is at school, Maude works out, either by running while pushing her son in the stroller, carrying him on her shoulders while walking or running on the treadmill while he plays.

˝I wouldn’t change anything. I really have this great thing going where I can play with the kids and train the way I want. It’s great.˝

Over the next year, her unwavering goal remains an invitation to the Tokyo Olympics, where she wishes to take part in the marathon distance.

˝If I qualify, I will still do a lot of road racing this year, and keep a little bit of mountain racing with the Golden Trail Series competitions,˝ she said. ˝I’m not going to participate in all the races, of course, but maybe one or two, like Zegama, which is quite early in the season. After that, the focus will really be on Tokyo, in August.˝

There, she primarily aims to achieve a good time for herself, which would be below the 2:30 hour mark. She does not place so much emphasis on the ranking as on her experience.

What about Plan B? ˝If I do not qualify, I will do three races in the Golden Trail Series, namely Zegama, the Mont-Blanc Marathon and Sierre-Zinal.˝

Maude was tempted by long distance racing, but in the end she chose to focus on trail distances other than ultramarathons.

˝I decided to make it shorter because it takes less time and because I wanted to do more competitions per year,˝ she explains. ˝I want to get back to longer distances eventually. I would say in three to four years from now, when I’m closer to the end of my career. But no very, very long ultras. Distances of no more than a hundred kilometers long.˝

2019 has been a year of learning. Maude, who suffered a sprained ankle in July, said that you shouldn’t be afraid to miss some training sessions and not follow a plan exactly as it is set out.

˝Sometimes you don’t have to be afraid to do another sport or even to take a break. It may mean riding a bike, cross-country skiing or something more than running. And the results are still there,˝ she said.

She is also impressed that she was able to break the course record at Sierre-Zinal when she did not think of performing since her training hadn’t been up to par due to her injury.

Wisdom comes with experience. As an elite athlete, she uses her body as a working tool. ˝Now, with the years and hindsight, I tell myself ‘take a break, do something else or abandon these goals because you’re heading straight into a wall.’ I no longer accept injuries.˝